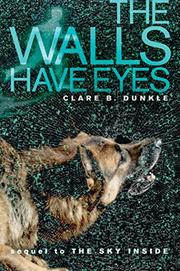 THE WALLS HAVE EYES

by Clare B. Dunkle

Like its predecessor The Sky Inside (2008), this sequel posits that no corrupt government is so powerful that it can’t be toppled by a boy and his robot dog. Frustrated with his uselessness among the genius children who make up the anti-government rebels, Martin and dog Chip return to domed Suburb HM1 to rescue Martin’s parents. In the ruins of an old-style outdoor suburb, Martin and his comfort-accustomed parents live a parody of a Leave It to Beaver lifestyle, unable to cope without television and convenience food. Ultimately, going it alone won’t be good enough, and Martin and his superpowered robot dog must confront the heart of the evil powers keeping his society subjugated. In a genre populated by gifted, destined and otherwise special child protagonists, Martin’s pure normality is a breath of fresh air. After an overly expository start, this simple tale provides comforting, enjoyable adventure. (Science fiction. 10-12)