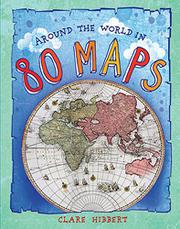 AROUND THE WORLD IN 80 MAPS

This picture book depicting 80 historic maps from the collection of the British Library is a self-described Eurocentric creation.

According to the introduction, the maps “give a unique view of how Europeans used to see the world—with themselves as the most important people in it!” But that isn’t the only drawback with this publication. The range in age, location, and historical context of the maps makes for a major challenge to readers of the age for which the book is apparently intended. The maps are organized by continent, showing an assortment of countries, cities, and provinces ranging from medieval times to the 19th century. The maps are unique historic documents, each requiring considerable scholarship to even begin to understand them historically and linguistically. Many are illegible due to the small size of reproduction. In an effort to make them accessible to children, each is dotted with a miscellany of colored labels containing trivia about the region, often unrelated to the era of the map. A 13th-century map of Britain bears a label naming popular dishes in the modern U.K., and a 16th-century map of London refers to West End theaters. Labels on each map challenge readers to find specific items, which is often impossible to do at this scale.

A well-intentioned and good-looking compilation but virtually unusable as a teaching tool.