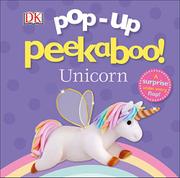 From the Pop-Up Peekaboo! series

Unicorns in all—well, most—colors of the rainbow spot playmates peering from behind flaps.

Modeled from what looks like very palely tinted Play-Doh or its digital equivalent and resembling edible confections, single-hued unicorns Moonbeam, Daydream, Cupcake, and Sunshine each pose in succession opposite a big, sturdy, shaped flap that, when lifted, causes the next unicorn to pop up near likewise elevated clouds, mushrooms, flowers, or some other hiding place. The first four gather (“There’s one more unicorn to find. / Where is he? Do you know / Has he found a hiding place / behind the big rainbow?”) for the climactic revelation of a fifth, named Sparkle, who combines all the colors of the visible spectrum—except, for some reason, violet (or maybe indigo—with all the pastels, it’s a little hard to tell), which is also missing from the pastel arcs atop and beneath the flap. Maybe rainbows are different in unicorn world.