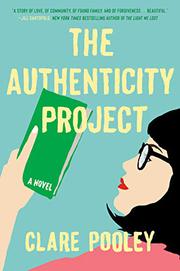 A group of strangers who live near each other in London become fast friends after writing their deepest secrets in a shared notebook.

Julian Jessop, a septuagenarian artist, is bone-crushingly lonely when he starts “The Authenticity Project”—as he titles a slim green notebook—and begins its first handwritten entry questioning how well people know each other in his tiny corner of London. After 15 years on his own mourning the loss of his beloved wife, he begins the project with the aim that whoever finds the little volume when he leaves it in a cafe will share their true self with their own entry and then pass the volume on to a stranger. The second person to share their inner selves in the notebook’s pages is Monica, 37, owner of a failing cafe and a former corporate lawyer who desperately wants to have a baby. From there the story unfolds, as the volume travels to Thailand and back to London, seemingly destined to fall only into the hands of people—an alcoholic drug addict, an Australian tourist, a social media influencer/new mother, etc.—who already live clustered together geographically. This is a glossy tale where difficulties and addictions appear and are overcome, where lies are told and then forgiven, where love is sought and found, and where truths, once spoken, can set you free. Secondary characters, including an interracial gay couple, appear with their own nuanced parts in the story. The message is strong, urging readers to get off their smartphones and social media and live in the real, authentic world—no chain stores or brands allowed here—making friends and forming a real-life community and support network. And is that really a bad thing?

An enjoyable, cozy novel that touches on tough topics.