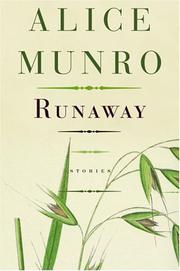 Retrospect and resolution, neither fully comprehended nor ultimately satisfying: such are the territories the masterful Munro explores in her tenth collection.

Each of its eight long tales in the Canadian author’s latest gathering (after Hateship, Friendship, Courtship, Loveship, Marriage, 2001, etc.) bears a one-word title, and all together embrace a multiplicity of reactions to the facts of aging, changing, remembering, regretting, and confronting one’s mortality. Three pieces focus on Juliet Henderson, a student and sometime teacher of classical culture, who waits years (in “Chance”) before rediscovering romantic happiness with the middle-aged man with whom she had shared an unusual experience during a long train journey. In “Soon,” Juliet and her baby daughter Penelope visit Juliet’s aging parents, and she learns how her unconventional life has impacted on theirs. Then, in “Silence,” a much older Juliet comes sorrowfully to terms with the emptiness in her that had forever alienated Penelope, “now living the life of a prosperous, practical matron” in a world far from her mother’s. Generational and familial incompatibility also figure crucially in “Passion,” the story (somewhat initially reminiscent of Forster’s Howards End) of a rural girl’s transformative relationship with her boyfriend’s cultured, “perfect” family—and her realization that their imperfections adumbrate her own compromised future. Further complexities—and borderline believable coincidences and recognitions—make mixed successes of “Trespasses,” in which a young girl’s unease about her impulsive parents is shown to stem from a secret long kept from her, and “Tricks,” an excruciatingly sad account of a lonely girl’s happenstance relationship with the immigrant clockmaker she meets while attending a Shakespeare festival, the promise she tries and helplessly fails to keep, and the damaging misunderstanding that, she ruefully reasons, “Shakespeare should have prepared her.” Then there are the masterpieces: the title story’s wrenching portrayal of an emotionally abused young wife’s inability to leave her laconic husband; and the brilliant novella “Powers,” which spans years and lives, a truncated female friendship that might have offered sustenance and salvation, and contains acute, revelatory discriminations between how women and men experience and perceive “reality.”

In a word: magnificent.

TOO MUCH HAPPINESS
by Alice Munro
Fiction

THE VIEW FROM CASTLE ROCK
by Alice Munro
Fiction

CARRIED AWAY
by Alice Munro
Fiction

LET ME OUT HERE
by Emily W. Pease
Indie

TRANSGRESSIONS AND OTHER STORIES
by Hilary Orbach
Indie