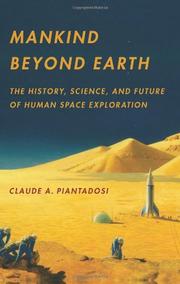 The History, Science, and Future of Human Space Exploration

by Claude A. Piantadosi

The director of Duke University's Environmental Laboratory offers an exciting evaluation of the potential for colonizing Mars by the end of the century.

Piantadosi (The Biology of Human Survival: Life and Death in Extreme Environments, 2003) reviews the history of the space program, with special emphasis on the biological challenges of human space exploration in a zero-gravity environment. In his view, establishing a manned moon base is a critical first step. “To get to Mars,” he writes, “astronauts must function in deep space for years and will face huge challenges in doing so.” While the moon is readily accessible, a population living on Mars would face the significant constraints imposed by distance and orbital mechanics. A Mars-based society would need to be self-sufficient, with fail-safe life-support systems in place (even a temporary loss of power would be catastrophic.) Further, colonists on the moon or Mars would face increased exposure to cosmic radiation, the loss of bone and muscle density, and possible challenges to their cardiovascular and immune systems. Despite the lower cost and reduced risk of the unmanned space program, Piantadosi believes that America (“the unquestioned leader in space since Project Apollo”) should also maintain its commitment to manned space exploration in order to keep its technological edge. While robots on the moon are already gathering important scientific information, only humans have the flexibility and imagination to allow scientists to pursue the unexpected. The author also considers the prospect of going beyond Mars to colonize the outer planets and beyond in the foreseeable future. He puts forth the lesson that the difficulties involved offer “the best incentives we have to take the best possible care of Spaceship Earth.”

An important book by a visionary with his feet planted on the ground.