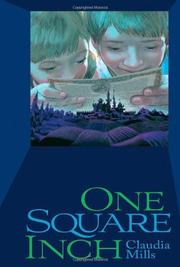 In this poignant tale, two children try to cope with their mother’s bewildering descent into bipolar disorder by retreating into their own imagined world of a miniature kingdom, Inchland. Sixth grader Cooper relates his account of his mother’s disabling depression that is followed by a manic phase that causes her to shop relentlessly, take on projects she can’t possibly handle, totally abandon housekeeping and finally neglect both children, especially second grader Carly. The children’s concern for their mother—Cooper Googles various diseases trying to find one that matches her symptoms—followed by their embarrassment as her behavior becomes more bizarre are affecting and emotionally true. Less believable are some of his thoughts: “Shards of frost lay littered on the lawn like broken glass,” or, “Ben with effortless strength and grace...” hardly seem like the voice of a sixth grader. Cooper’s efforts to protect his sister by helping her develop Inchland, however, are both tender and at times pathetic. While engaging, it’s difficult to imagine a large audience for this often painful story. (Fiction. 10 & up)