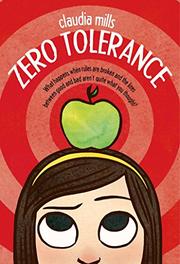 After turning in a paring knife she accidentally brought to school with her lunch, a high-achieving, rule-following seventh-grade girl is suspended, and her case becomes a media sensation.

Rules require exceptions, people are more complex than they seem, and bigheartedness trumps revenge: These are some of the many themes author Mills takes on in this idea-stuffed, somewhat overpopulated but thought-provoking novel. No one is more surprised than the slightly smug Sierra Shepard when she goes from teacher’s pet to class pariah. Before you can say “knife fight,” she’s clapped into the duller-than-dull in-class suspension room and given a hearing date for likely expulsion. This enrages Sierra’s hard-driving attorney father, who alerts the media, bringing attention to her plight. Unfortunately, it also puts the well-meaning Principal Besser between a rock and a hard place and stirs conflict with Sierra’s artsy mother. Being treated like a criminal causes Sierra to do something surprisingly rotten that could upend her case, and, straining credibility, Principal Besser has a secret he’d rather not reveal. Ideas and personalities compete for page time, giving some of the scenes a sketchy feel, but readers should be fully engaged by the suspenseful climax. Sierra learns that her fellow detainees are sympathetic individuals, particularly her always-in-trouble classmate, Luke Bishop, and ultimately, the situation gives her a more nuanced perspective and generosity of spirit.

Provocative and fun, from a master of the school story.