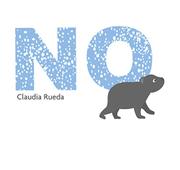 As she did in My Little Polar Bear (2009), Rueda creates a conversation between mother and cub. This time, however, a little black bear is asserting his independence by using one of his favorite words: “NO.” Mother suggests that it is time to hibernate for the winter, but little bear has other ideas. With each gentle warning from mother—“The wind will blow hard”—little bear has an assured response. “I am very strong,” he says. So he is left alone, celebrating his victory. But when a blinding snowstorm practically buries little bear, he realizes mother might have known best. He rushes back to the cave. But he’ll certainly never admit the real reason to Mamma, instead impishly suggesting that he’s just there to keep her company. Flat figures in a minimal wintry palette nevertheless burst with personality, abetted by clever compositions. Set against a spare, pale background, snow falls down in bold splatters, increasing with each page turn. Little bear’s tireless opposition will resonate with every parent, and maybe—just maybe—a toddler or two will learn a lesson along the way. (Picture book. 2-5)