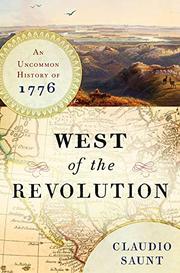 WEST OF THE REVOLUTION

An Uncommon History of 1776

A multilayered American history of “formative events…occurring not just along the Eastern Seaboard but across all of North America.”

The year 1776 had enormous repercussions in the West, opening up the land to the exploring Spaniards and rapacious Russians and decimating the Native Americans as well as significant native fauna like otters and beavers. Saunt (American History/Univ. of Georgia; Black, White, and Indian: Race and the Unmaking of an American Family, 2005, etc.) explores what the rest of the continent was up to at the same time that George Washington was forming his Continental Army and Patrick Henry was disclaiming on liberty or death—namely, a rush for land and furs and the pushing out of the Indians in the way. Some of the alarming events included the purchase by speculator Richard Henderson of a whopping 22 million acres of land in what is now Kentucky and Tennessee from the Cherokee leaders for a pittance in a naked grab after British collapse; Capt. Ivan Solovyev and his band of Siberian trappers wreaking havoc on the native Aleuts; and the Spaniards, fearing Russian incursions in California, inciting the displeasure of the native Kumeyaays in the process, while conquistador Juan Bautista de Anza and his exploring party were making first contact with the Costanoan-speaking Indians in the San Francisco Bay. The division of the continent in two along the Mississippi River at the conclusion of the Seven Years’ War (1763) allowed some tribes to take advantage of increased trade, while most others straddling the divide were crushed. Saunt ably juggles myriad events—the Hudson Bay Company causing the near extinction of many species of animal, the Lakotas’ discovery of the fertile Black Hills—throughout his compelling narrative.

A welcome amplification of the American story.