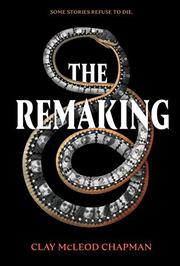 After a mother and her daughter are murdered, their legacy evolves into a ghost story that haunts generations.

Horror on film is relatively easy: jump scares, gore, the occasional torture porn, and always the final girls. Horror in fiction is a little trickier, but occasionally you get something special like Mark Z. Danielewski’s puzzle box, House of Leaves (2000), John Ajvide Lindqvist’s Let the Right One In (2007), or, more recently, Josh Malerman’s runaway hit Bird Box (2014). Chapman’s (Nothing Untoward, 2017, etc.) spooky story solidly fits the mold of nothing you’ve ever read before. The book is divided into quarters, each entirely original yet always connected and deeply unnerving. The opener finds an old coot recounting the story of a woman named Ella Loise Ford, known to the small town of Pilot’s Creek, Virginia, to be a witch. The men in the town don’t take kindly to this, and in 1931, they set the woman ablaze, along with her young daughter, Jessica, whose resting place would become the legend known as “The Witch Girl’s Grave at Pilot’s Creek.” Jump forward to 1971, and their story is being made into a B-quality horror film directed by an obsessive filmmaker and starring a young ingénue named Amber who discovers these terrifying woods hold much more than just rumors. By the mid-1990s, Amber, now a burned-out, Klonopin-addicted scream queen, takes over the story to recall her role in an ill-fated remake of the cult classic that nearly killed her. By the modern day, there’s yet another shift, as a budding podcaster named Nate Denison tracks down an aged Amber to discover what’s really waiting out there in the woods. Something like Stephen King’s imperfect masterpiece The Shining (1977), this book is not always completely coherent, but it’s a deeply eerie and evocative portrayal of what it’s like to stare into the abyss and find something there waiting for you.

A memorable, disquieting ghost story about stories, rendered inside a Möbius strip.