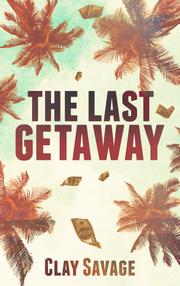 Two getaway drivers from different crews are thrown together when a bank heist goes wrong in Savage’s debut novel.

Richie Glass of Beverly Hills, California, has squandered his money and privilege and is now a “drinker, gambler, antiauthoritarian, [and] smart-ass” in debt to the wrong people. Now, he works as a getaway driver for “a bunch of shit-for-brains bank robbers,” as he puts it. Calvin Russell is a professional carjacker and thief, much to the displeasure of his wife, who’s afraid that the criminal life will affect their young son. The only thing Richie and Calvin have in common—besides being in desperate straits—is that they’re both separately waiting outside the American Federal Bank while, inside, two crews are bent on robbing the place. Eight robbers wind up dead, leaving Richie and Calvin at large, and the people pulling the strings on the labyrinthine plan very much want what they have—which includes not only cash, but also a box of gold and silver coins. As the two drivers get themselves in deeper, their initially antagonistic relationship transforms into something like a friendship, and they’re forced to rely on each other when things break very bad. Overall, Savage delivers a credible and entertaining crime novel. Richie and Calvin’s relationship is sometimes reminiscent of that of hit men Vincent and Jules from the 1994 film Pulp Fiction, particularly in a dialogue exchange following a seemingly miraculous escape from certain death. The author has a lean, spare prose style: “Luke Stanton, the middle aged CPA who met a gangster in a bar and thought he could jump ahead by going into business with him, fell to the floor and moaned.” Although the plot about two screw-ups who “only made bad choices” certainly isn’t novel, Savage offers fresh wrinkles on noir tropes and has a welcome, mordant sense of humor. For example, at one point, a character comments to Richie and Calvin about how well an operation is going: “Yeah, well, you haven’t been hanging out with us very long,” Richie responds. “Don’t get too comfortable.”

A crackerjack read from an author who seems to have taken Elmore Leonard’s rules of writing to heart.