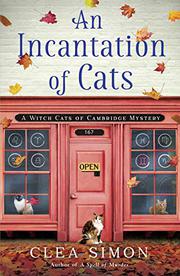 AN INCANTATION OF CATS

The Witch Detective of Cambridge, Massachusetts, has two clients knocking at her door, each one evidently suspicious of the other.

Since losing her job with the Cambridge Historical Society, Becca Colwin has been hoping that the paranormal powers she’s advertised in venues like Charm and Cherish, the New Age boutique that offers one-stop shopping for the local Wiccan community, will help turn her fledgling detective agency into a moneymaker. Among all the other difficulties of launching such a questionable venture, two are especially troubling. One is that minutes after Gaia Linquist, an aspiring herbalist who works at Charm and Cherish, leaves after asking her help in determining who left poisonous wolf’s bane in her coffee mug, Becca gets a visit from Margaret Cross, the co-owner of Charm and Cherish, who wants her to get the goods on the person who’s been stealing money from the till for the past three weeks—a thief she strongly suspects is Gaia Linquist. This question of how to decide between the two cases or how to juggle them both is daunting enough, but the second problem would be even more vexing if Becca had the slightest awareness of it. She doesn’t have any special powers at all; whatever success she’s enjoyed as a crime solver (A Spell of Murder, 2018) is due entirely to her three cats, littermates who actually do have them. Harriet can conjure physical objects; Laurel can manipulate human minds; and Clara can leap through solid objects. Although the mystery soon deepens to include the death of Margaret’s philandering husband, car dealer Frank Cross, it’s not at all clear whether he was felled by his heart condition or poisoned by wolf’s bane. Simon expertly casts suspicion on one member of her tiny human cast after another, but this series is really for readers who want all cats, all the time.

The three paranormally empowered feline detectives carve out a niche within a niche.