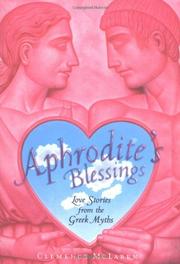 Love Stories from the Greek Myths

McLaren (Waiting for Odysseus, 2000, etc.) chooses Atalanta, Andromeda, and Psyche for her contemporary retellings of fates touched by Aphrodite’s hand. Told in the first person, each offers the basic story, but from a woman’s point of view. Atalanta loves to run, and hates the confines of women’s usual lives in Arcadia. But she is horrified when she learns that the young men she bests in racing will be put to death. It is the prince Milanion from Thrace who tosses exquisite golden apples in her path as they run. She cannot resist their charms from Aphrodite, and he wins the race, and, happily, her hand. Andromeda is sacrificed to the sea monster for her mother’s witless vanity, and rescued by the hero Perseus, whom she had seen in her dreams. And Psyche’s happiness is poisoned by her sisters, who tempt her to betray her loving Eros’s trust and seek to look at him in the light—she loses Eros then, but regains him and even gains his mother Aphrodite’s grudging approval. The modern idiom sometimes jars, and sometimes is clichéd, but the stories survive their transport to the language of Xena and Britney. An author’s note details some of the changes made in the interests of both storytelling and romance. (Myth/folklore. 12+)