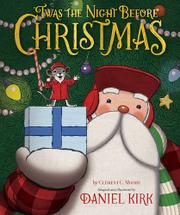 'TWAS THE NIGHT BEFORE CHRISTMAS

This interpretation of the classic Christmas story includes a few twists, such as a mouse family in the main roles, a human Santa dressed as a lumberjack, and some minor updates to the text.

Kirk is well-known for his Library Mouse series, and here he uses that expertise to create a believable mouse character and a cozy mouse house decorated for Christmas. Father Mouse wears a red nightshirt and cap, and he narrates the story just as a human father would. Santa wears a red cap with earflaps, a red buffalo plaid jacket, and tall brown boots. The text states that he was dressed “like a woodsman” rather than “all in fur.” The verse with Santa smoking his pipe is eliminated in this version, and a few lines of the traditional text are updated here and there, with “yummy treats” instead of sugarplums and no mention of “laying his finger aside of his nose.” An author’s note details the reasons for the textual changes and also explains that the mouse narrator is the father of Sam, the main character in the Library Mouse series. Clues to this relationship can be found in the illustrations, such as Sam’s stocking hanging by the fireplace in the mouse house. The illustrations are attractively composed, with textural highlights and speckles of snow in dark blue skies.

Some will miss seeing Santa in a traditional red suit (fur or not), but Library Mouse fans will enjoy this peripheral extension of the series.