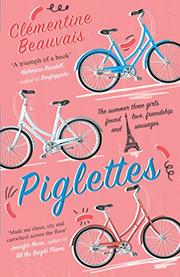 A gloriously feminist, fat-positive romp translated from the French.

After school bullies name them the gold, silver, and bronze winners respectively in the annual Pig Pageant on social media, Astrid Blomvall, Hakima Idriss, and Mireille Laplanche are battered but unbowed. The three girls concoct a plan to cycle to Paris in time for the Bastille Day celebration, where each will fulfill a personal dream. Mireille is eager to meet her biological father, a philosophy professor who is married to the French president and does not know she exists. Hakima, whose brother, Kader, lost his legs fighting for France in a desert war and who serves as the girls’ chaperone on their weeklong journey, would like to confront the general who has not given him credit for his brave sacrifice. Astrid, meanwhile, would like to meet Indochine, her favorite band, who will be performing at the garden party and whose music has given her the strength to persevere in the face of hardship. The four misfits become national celebrities as France rallies around their cause. Respecting the ability of teen readers to interpret challenging material without having lessons spelled out for them, the work is a mixture of righteous fury and light, witty banter. Addressing racism (the Idriss family are Muslim immigrants), misogyny, and fat-phobia, the story is a refreshing and empowering coming-of-age tale.

Say oui to this thoughtful and intelligent story of outsiders rising up.