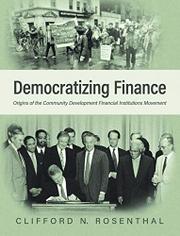 A detailed history of community development financial institutions and the overall effort to provide capital to the economically disenfranchised.

The “problem of providing access to capital to people on the economic margins” isn’t a new one, argues debut author Rosenthal, but dates back to the nation’s origins. At the end of the 18th century, Benjamin Franklin understood that “aspiring entrepreneurs of the working class” were stymied by insufficient access to capital, and he advocated a nascent version of microenterprise lending. And in the wake of the Civil War, the Freedmen’s Bureau established banks specifically designed to serve former slaves. The author meticulously traces this history through the explosion of credit unions in the early 20th century, the recommitment to battling poverty in the 1960s, the proliferation of community reinvestment strategies in the 1970s, and opportunities generated by the banking scandals of the 1980s. The central focus of the book, though, is the creation of CDFIs, possible because of a law signed by President Bill Clinton in 1994. Unlike those programs that preceded it, CDFIs were designed to be less centralized and bureaucratic and more adaptable to community needs. Rosenthal expertly discusses the approach’s sundry strengths and accomplishments and its weaknesses, too, particularly with respect to the funding of social services, education, and health. And while the author’s history is granularly detailed, he raises provocative, philosophical questions about what we’ve cumulatively learned over the years: “How do we describe the universe of diverse institutions that bear that brand—now arguably the most valuable one in community development? Finally, what is the nature of the social phenomenon that we call community development finance?” Rosenthal is more than a detached observer—he led the National Federation of Community Development Credit Unions for more than 30 years, the source of both his deep knowledge and obvious passion for the subject. His account is magisterially thorough and thoughtful—and timely given renewed calls to defund the CDFIs.

A remarkably incisive history and a wonderfully relevant contribution to an ongoing debate.