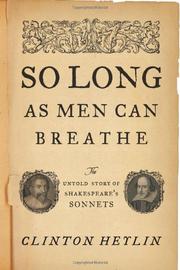 SO LONG AS MEN CAN BREATHE

The Untold Story of Shakespeare’s Sonnets

The author of Bob Dylan: Behind the Shades (1991) and Bootleg: The Secret History of the Other Recording Industry (1995) concludes that an even more famous bard was both victim and beneficiary of “booklegging” when Shake-speares Sonnets appeared in 1609.

Heylin alludes frequently to his hero Dylan (“the Shakespeare of his day?”) and sees numerous correlations between the mysterious case of the Sonnets and the bootlegging of rock recordings. But he has also done his homework and presents in often frisky language some convincing answers to questions that have perplexed scholars for centuries. Did Shakespeare approve the publication of these intimate poems? Who was the “W.H.” of the dedication? Who were the real-life prototypes for the Dark Lady, the Fair Youth and the Rival Poet? Did he write those last two weak Cupid sonnets? Or “A Lover’s Complaint,” that long boring poem published with the Sonnets? Heylin demonstrates a scholar’s diligence and even makes a quick allusion to Jonathan Bate’s forthcoming Soul of the Age: A Biography of the Mind of William Shakespeare. But the author has come to bury, not praise most previous scholars and theorists, including venerable Shakespearean A.L. Rowse. Heylin is particularly disparaging about the work of Katherine Duncan-Jones, editor of Arden’s 1997 edition of Shakespeare’s Sonnets. Only near the end does he credit Duncan-Jones for being “the first modern academic” to recognize that the 108 “Fair Youth” sonnets are “a sequence unto themselves.” Heylin’s primary complaint about most of the experts is their determination to make what few facts there are conform to preconceptions—e.g., that Shakespeare could not have been bisexual. The author nominates minor poet John Davies as the most likely candidate to have snitched the sonnets and composed “A Lover’s Complaint.”

Will not endear Heylin to academics, but does disperse some smoke while fanning the flames of this fiery debate.