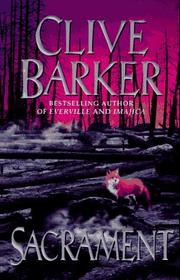 Another ambitious and challenging dark fantasy from the popular author (Imajica, 1991; Everville, 1994, etc.) and filmmaker (Hellraiser), who is almost single-handedly elevating supernatural fiction to new levels of both literacy and intensity. Barker begins in characteristic fever-pitch fashion, with a horrific extended tableau set in the frozen wasteland of Canada's Hudson Bay, where famed wildlife photographer Will Rabjohns is mauled and nearly killed by a polar bear. Sunk in a coma, Will dreamily relives his early years in England: the death of his much- loved (and favored) older brother, his lonely childhood in a small English village, and his fateful and formative encounter with a pair of otherworldly recluses, Jacob Steep and Rosa McGee. Jacob, a self-styled ``Death's Agent'' committed to changing the shape of the world by destroying creatures that are ``the last of their kind,'' and Rosa, a kind of lamia who lures men to sex and to death, came to be accepted by the incipiently psychic Will as ``his connection to something bigger than the life he'd been leading.'' Recovered now from his bear wounds, Will returns to his home in an increasingly moribund San Francisco: He is gay, and he finds ever more friends and lovers dying. Then, in a provocative imaginative leap, he perceives that the destruction of animal species and the wholesale slaughter inflicted by the AIDS pandemic are akin and may spring from the same source—so he returns to England, seeking a reunion with Steep and McGee and the meaning of the riddle with which Jacob had encouraged Will's fascination with dying things: ``Living and dying, we feed the fire.'' By turns suspenseful, intellectually exciting, wildly melodramatic, turgid, and bombastic, Barker's novel is charged—in its complex development and surprising resolution—with very real, very human emotion. A weirdly absorbing and entertaining tale that offers more disturbing delights from one of our most inventive and risk-taking writers. ($175,000 ad/promo; author tour; TV and radio satellite tour)