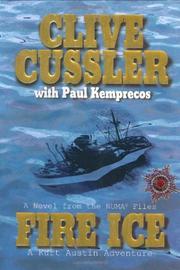 by Clive Cussler with Paul Kemprecos

Following trade paperback originals Serpent (1999) and Blue Gold (2001), this third dual-authored novel “from the NUMA Files” leaps to hardcover status. Dirk Pitt, the hero of all previous National Underwater & Marine Agency novels, has been replaced by Kurt Austin and talkative partner Joe Zavala for the coauthored sub-series, which has also evidenced an amazing rise in Cussler’s command of the English language (perhaps borrowed from Kemprecos). Fire Ice, however, is as jump-plotted and far-fetched as top-grade Cussler. As ever, he opens long ago, this time in Odessa with the Romanov children escaping the rebels by boat. Now, megalomaniac billionaire mining tycoon Mikhail Razov, claiming Romanov descent, has declared himself Czar of Russia. Meanwhile, three man-made tsunamis wipe out a Maine harbor, a research sub is hijacked in the Aegean, and a plane crash in the Black Sea delivers Kaela Dorn, filming a show for Unbelievable Mysteries, into Kurt Austin’s protection aboard his NUMA survey vessel. All this turns on treasure Razov wants to recover in his takeover of Russia. The US is dead-set against Razov’s move, but he doesn’t mind: he has plenty more tsunamis up his sleeve.

Fans may miss Dirk Pitt, but the story goes down like a chilled Stolichnaya martini.