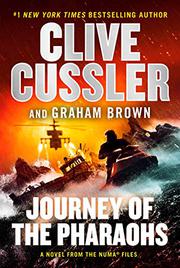 JOURNEY OF THE PHARAOHS

Rumors of lost Egyptian treasure spark high adventure in this 17th in the NUMA series featuring oceanographer Kurt Austin and his crew (Sea of Greed, 2018, etc.).

Over 3,000 years ago, grave robbers sail away with loot from a pharaoh’s tomb. In 1927, Jake Melbourne and his plane disappear in his attempt at a trans-Atlantic flight. In the present day, arms merchants known as the Bloodstone Group have taken to stealing antiquities. They are looking for a “treasure both vast and glorious” that hieroglyphics say was shipped down the Nile and out of Egypt, perhaps even west across the Atlantic. (Holy scurvy! That must’ve been a lot of hard rowing!) The criminals are known to MI5 as “very dangerous people" and "merchants selling death.” Perfectly willing to kill everyone in their way, they are aided by mechanical crows and Fydor and Xandra, nasty sibling assassins jointly called the Toymaker. Such are the foes faced by Austin and his team from the National Underwater and Marine Agency. Of course, Austin has no interest in profit; he will gladly leave the ancient riches wherever they are. Action arrives early and often, and the failed pre-Lindbergh flight fits in neatly. Cussler and Brown concoct a nifty plot with disparate, sometimes over-the-top twists that will make even hardcore adventure fans say “Wow!” Expect claustrophobic gunfights, aerial combat, a life-threatening flood, messages from the dead, coffins of gold—and a vintage classic car, because why not? “We’re going to steal the greatest deposit of Egyptian treasure the world has ever known,” brags the evil mastermind. But he’ll have to climb over the series hero’s dead body first, which—no plot spoiler here—ain’t gonna happen.

This is fast-paced, nonstop fun. Cussler fans will gobble it up.