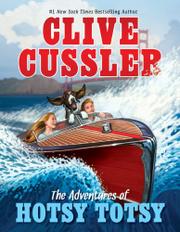 THE ADVENTURES OF HOTSY TOTSY

Casey and Lacey Nicefolk are itching for another adventure. Good thing their parents are off on a visit to Aunt Polly’s, leaving the fraternal-twin ten-year-olds alone on the herb farm in sunny California. Casey builds a model of the vintage championship speedboat Hotsy Totsy, and they use the Mystery Box left by itinerant farmhand/wizard Sucoh Sucop to turn it into a full-sized boat so they can enter the Gold Cup Grand National Powerboat Race. Unfortunately, “The Boss” has escaped from jail and plans revenge against the Nicefolk kids. Fortunately, he and his bumbling sidekicks are no match for the magic of Hotsy Totsy. Cussler’s sequel to his abysmal Adventures of Vin Fiz (2006) suffers from all the same problems: stilted prose, gender stereotypes, unrealistic dialogue, deus-ex-magicus solutions to every problem. Both read as if written by someone who closed the cover on their last children’s book in 1940. A publishing event that demands an apology to the industry, all children and the trees that gave their lives. (Magical adventure. 7-10)