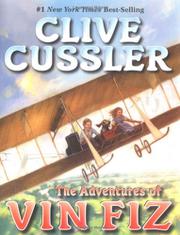 THE ADVENTURES OF VIN FIZ

Seeking a younger audience, Cussler adds a broad streak of magic to the action/adventure formula of his adult bestsellers. After mysterious farmhand Sucoh Sucop (read it backwards) leaves a machine that turns toys into full-size working machines amid swirls of starry purple mist, ten-year-old twins Casey and Lacey Nicefolk convert a model into an actual Wright biplane and, accompanied by their basset hound Floopy, fly from California to New York City. Being clairvoyant, intelligent and responsive to spoken commands, among other unusual abilities revealed as needed, the “Vin Fiz” (named after an actual plane, as the author explains in an afterword) plays a leading role in heading off a train wreck, a boat collision and the nefarious schemes of not one but two bands of robbers along the way. Slow off the mark, abrupt at the end and low on suspense in between—a quality that Farnsworth’s rare, casual sketches pick up nicely—this outing isn’t as awful as, for instance, James Clavell’s Thrump-O-Moto (1986), but it reads like a knockoff. Try again, Cussler. Kids can be more discriminating than adults. (Fiction. 9-11)