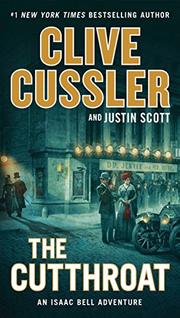 It’s No. 10 in the Cussler and Scott (The Gangster, 2016, etc.) series chronicling the adventures of rich man–sleuth Isaac Bell and the Van Dorn Detective Agency as the 20th century dawns.

It’s 1911, and Bell’s promised a Connecticut millionaire he’ll find his daughter, a young woman who left the lap of luxury and went missing among the wanna-be actors, money-grubbing producers, and crooked agents of New York City’s theater district. Bell finds her, but too late. The girl’s been murdered. Bell is distraught, angry, and now feels compelled to catch her killer. Soon Van Dorn’s research group unearths other murders with similar modus operandi—laid open with a large knife, up close and personal—from as far away as Jack the Ripper’s London to New York and to cities across the country as far as Los Angeles. Tracing the elusive killer, Bell forms a "Cutthroat Squad," a double-handful of tougher-than-nails Van Dorn detectives. Bell and squad soon figure out the murders are occurring wherever a touring theater group is presenting the play Dr. Jekyll and Mr. Hyde. The narrative makes stopovers at the Savile Club in Mayfair and NYC’s Knickerbocker Hotel, and as with nearly every Cussler tome, contemporary gadgetry—a Morkrum Printing Telegraph, an Atlantic 4-4-2 Deaver-built locomotive—adds authenticity to the period setting. It’s an action-packed, fast-moving, but not especially gory story, with pauses for Bell to use his fists or .45 or flaunt his wealth. Famous folk like Caruso make cameos, but Bell, an engrossing-enough meld of Dudley Do-Right and James Bond, and his cohort of detectives get their man.

Despite an awkward transition or two and a bit of padding (there’s a recipe for Welsh rarebit), the Bell series hits the right note for those who like crime fiction with a unique setting.