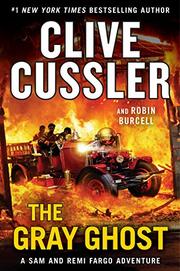 The 10th and latest Sam and Remi Fargo adventure (The Romanov Ransom, 2017, etc.) is a fast-paced tale that reaches back to the early days of automotive glory.

In Manchester, England, in 1906, the Gray Ghost has gone missing. That’s the Rolls-Royce prototype developed by Charles Rolls and Henry Royce, and the loss threatens to financially ruin them. They hire a detective to locate it, but he is murdered. In the present day, Sam and Remi Fargo hear about the car, which turned up after World War II but is now missing again. It's always been owned by the Payton family, which generations ago was the Oren-Payton family, and may be worth many millions of dollars. Raising the stakes even higher, the 1906 thieves may have hidden treasure inside the car, though there was no trace of it when the Gray Ghost was found after the war. But jealous modern-day cousin Arthur Oren has the car stolen and then loses track of it—has the thief he hired stolen it twice? It’s a complicated and clever plot, with Sam and Remi trying to find it for the current owner, Lord Albert Payton, Viscount Wellswick. The 1906 journal of Jonathon Payton, fifth Viscount Wellswick, provides a solid backstory. The Fargos are great series characters, whip-smart and altruistic self-made multimillionaires who can afford to take time from their charity work to dabble in dangerous adventures. Oren knows they’re involved, and he wants them both dead and the car returned. An accomplice suggests first making the Fargos destitute by freezing their bank accounts and credit cards. Then the bad guys can arrange a fake suicide. It’s fun to watch Sam and Remi get out of dicey scrapes, once by driving an Ahrens-Fox pumper fire engine out of a blazing building. Oren asks, “How hard is it to knock off two socialites?” He finds out the hard way; he should have just acquainted himself with Cussler’s series.

Thriller fans will delight in this latest escapade. Cussler and co-author Burcell have delivered a winner.