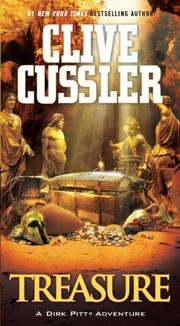 In this latest chapter in the Dirk Pitt saga (Raise the Titanic!, Cyclops)—which finds the recovery mariner seeking a truly mind-boggling treasure—Cussler pumps out yet another preposterous plotboiler with uncappable good cheer. Its cartoon characters speaking in balloons, the story—whether flying or submerged—is much like a Classic Comix version of Jules Verne's novels of fantastic transportation. It begins in antiquity, with Theodosius about to burn the library at Alexandria. A rogue fleet sets sail bearing the cream of the library's artifacts and scrolls, including the complete works of Homer in 27 books and the coffin of Alexander (with the world conqueror himself inside). Many weeks later the ships manage to bury their treasure in a remote land, but all except one of the ships and their crews are lost when attacked by savages (actually Aztecs). The lone ship to escape later freezes in ice near Green-land, its passengers preserved perfectly. Two millenia later, Dirk Pitt discovers the the frozen vessel while looking for a lost Russian nuclear sub under the Arctic ice. Meanwhile, an Islamic terrorist group tries to kill the female Secretary of the United Nations, a beautiful Egyptian, by crashing her jet into the Arctic ice. Not only does Dirk hear the plane go down, so does a group of archaeologists on a nearby island. At the same time, in Mexico, a messianic Aztec has arisen and plans to take over the country. Later, he even invades Texas. A map Dirk finds on the frozen Byzantine ship now leads him to Roma, Texas, since it is clear that the fleeing Alexandrians have sailed up the Rio Grande and buried their loot in a Texas hillside. Does the thoughtful reader now explode with tears of appreciation for such zestful nonsense? Many will, many will!—especially when our hushed President is at last shown the golden casket of Alexander the Great: "The President felt as if he was about to meet God." Titantic. Just titanic.