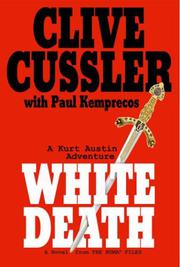 by Clive Cussler with Paul Kemprecos

Fourth in the new, co-authored, Kurt Austin series (Fire Ice, 2002, etc.), which has been received with restrained jubilance.

Once more Cussler/Kemprecos open with a historical anchor for their tale. West of the British Isles in 1515, a sprightly Basque caravel battles three Spanish war galleys and sinks two of them before the third takes off. In Germany in 1935, the huge hydrogen-filled zeppelin Nietzsche sets forth on a secret flight to reach the North Pole—though the world will hear if success is had. Entering the Arctic, however, the German captain spies a ship stranded on the ice, and he descends (fatally?) to lend aid. Then, in the present, by the Faroe Islands halfway between Denmark and Iceland, whale-huggers on the big, blindingly psychedelic Sea Sentinel make an SOS eco-intervention to save a pod of fifty whales about to be slaughtered by Faroe Islanders. But a chopper overhead somehow takes control of the ship and rams it into the Leif Eriksson, a Danish cruiser, sinking the cruiser with several men still aboard in an airtight space. Twelve hundred miles away, off the Berents Sea by the northern coast of Russia, Kurt Austin tests a new submersible as part of his massive search-and-survey NUMA ship, the William Beebe. The new submersible has the ability to attach to the hull of a sunken ship (or a submarine with its hatch locked shut) with a big sucker mouth that allows a laser to cut a hole and salvagers to enter the lost ship. How can Kurt, his colleague Joe Zavala, and their new submersible answer the rescue call 1200 miles away before the trapped Danes are dead? Well, by Russian transport planes. Once the rescue is effected, a bit of Danish romance blooms before Kurt finds himself facing the megaloid multinationals whose chopper sank the Leif Eriksson, not to mention a madman’s museum—and the horn of Roland!

Zestful heroics. Should rise to the top like one of Cussler’s real-life lost ships.