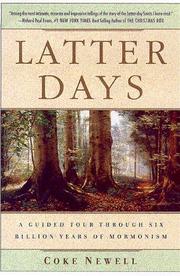 A Guided Tour Through Six Billion Years of Mormonism

A Mormon primer that believers and nonbelievers alike will profit from.

At the start, Newell lays his cards on the table: he is a devout Mormon, albeit a convert to the faith from a vegetarian, rockandroll background. He is also a pretty leisurely writer: his history of Mormonism doesn’t get to its founder, Joseph Smith, until chapter eight. The first seven chapters lay the foundation, starting with Gods creation of the world. Those who know their Bible may be tempted to skip ahead, but those who don’t will learn that the Church of Jesus Christ of LatterDay Saints (that’s the official name) believes that “long, long ago you and I were born as spirit children of God, and, naturally, a Goddess”; that Adam and Eve knew (and lived in accordance with) the Gospel; and that, after his resurrection, Jesus visited North America. In short, we are offered not just Mormon history, but Mormon cosmology, as well. Then Newell takes us through more familiar territory—Joseph Smith receives his visitation in 1820, translates the Book of Mormon, and organizes his band of faithful followers. They set up shop in Missouri, and then later in Nuavoo, Illinois, where Smith is assassinated. Brigham Young leads the LatterDay Saints to Utah. If Newell’s historical narrative is not terribly original, he does give more attention to Young than most accounts—and this is important because, while all sectarian groups have charismatic founders, what distinguishes those that survive from those that fade after a generation or so is the ability of the second leader (the one who comes after the founder) to seize the reigns of command and take charge—something Young did masterfully. Newell’s account would have benefited from more coverage of contemporary Mormon life (in the style of Richard and Joan Ostling’s Mormon America). Furthermore, nonMormon readers may be put off by Newell’s occasionally sanctimonious and smug tone.

But, on the whole, this is an engaging introduction to Mormon history and belief.