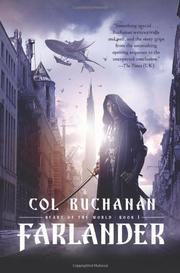 Thanks to its superior weaponry, the Holy Empire of Mann has conquered most of the world in its blind desire to spread its appalling, sadomasochistic religion. Among the few holdouts are the Mercian Free Ports, the besieged city of Bar-Khos and the Roshun assassin cult which offers personal protection through the threat of vendetta. Dying assassin Ash takes an apprentice, Nico, a street urchin from the war-torn streets of Bar-Khos. But then Kirkus, the heir to the throne of the Empire, kills a girl under the protection of the Roshun as part of his religion's ghastly rituals. To fulfill this vendetta, Roshun must penetrate to the very heart of the Empire. Predictably, therefore, the first three to be chosen fail the task. So ailing old Ash, his rival assassin Baracha and their respective apprentices Nico and Aléas are selected. Meanwhile Sasheen, the Holy Matriarch, knows that Roshun will come to kill Kirkus, so she prepares a counterstrike against the Roshun monastery itself. This entirely conventional backdrop—evil empire, enigmatic sage, starveling apprentice and so forth—comes across as humdrum or, worse, derivative. Still, the writing is mature, the action sequences gripping and suitably bloodthirsty, and there's a plot twist or two. But the doubt remains: Does Buchanan have a real imagination, or is he merely a skilled embroiderer?

Vivid, impressively detailed work, but readers who find the lack of originality a huge turn-off may not hang around for the rest of the series.