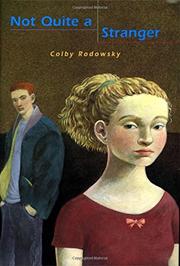 NOT QUITE A STRANGER

The only real fly in 13-year-old Tottie’s ointment is when embarrassing moments are rendered as “universal truths” in her mother’s newspaper column for the world to read—until 17-year-old Zachary shows up, the spitting image of Tottie’s father. Zachary is the product of a med-school indiscretion and was presumed to have been adopted at birth. Zachary’s first-person narration alternates with Tottie’s, informing readers that his mother chose to raise him alone, and happily, until her death from cancer drives him to his father’s door. His numbness at the devastating turn of events that plunks him into the laps of strangers is effectively rendered, as is Tottie’s unreasoning anger at him for upsetting her world and her father for revealing feet of clay. That the family in its new configuration eventually adjusts is never really in question, but Rodowsky’s deliberate treatment allows her two main characters plenty of room to explore their feelings. If the secondary characters are more than a little too good to be true, this still does nothing to void the honest emotions of the newly joined siblings. (Fiction. 10-13)