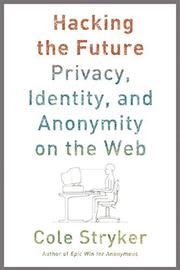 A multilayered and well-reasoned retort against all those who would seek to erase anonymity from the Web.

Since hired assassins and child pornographers on the Internet hide behind anonymity to prey on their victims and escape prosecution, anonymity should be scrapped and replaced with full “transparency”—that's the way the argument goes. Unfortunately, as media consultant Stryker (Epic Win for Anonymous: How 4chan's Army Conquered the Web, 2012) so effectively argues in this stirring call to action, a lot of other types of people also rely on anonymity for their continued existence. Coldblooded killers and creepy pedophiles may exploit the Internet's openness, but so do patriots, reformers, human rights advocates and soccer moms. The author explores the rich history of anonymity in politics, literature and culture, while also debunking the notion that only troublemakers fear revealing their identities to the world. In relatively few pages, the author is able to get at the heart of identity itself, and why the name on your driver's license isn't sufficiently revelatory. The Web has become a battleground, and depending on who wins, the Internet could soon bear little resemblance to what we know now. Stryker also introduces the uninitiated into the "Deep Web," alternative currencies and even the nascent stages of a kind of parallel Web that exists beyond the power of governments to switch it off. Beyond even that is the fundamental question of whether or not absolute anonymity is even possible given the nature of the technology.

One of the most well-informed examinations of the Internet available today.