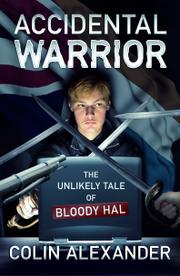 The Unlikely Tale of Bloody Hal

Hal Christianson, 18, from White Plains, New York, is a 2016 American college freshman stranded in a cave on a dark and stormy night after a party. He literally falls into an alternative North America—the same place, in 2016, but now a semi-wild country, where Colonial-era levels of technology, values, and power struggles prevail. A friendly “woodsranger” explains, conveniently, the backstory. The American Revolution never happened. Instead, an extinction-level plague swept 17th-century Europe, sending boatloads of refugees bearing remnants of their rival imperial cultures—English, Dutch, French, and Spanish—to the New World. They wage war with one another over territorial domination in between truces and trading alliances. Hal (fortunately, a member of a school fencing team) adapts to this new abnormal with some finesse and a bit of luck that earn him a useful but reluctant reputation as a serious fighter. He accompanies a Swedish merchant expedition (actually a cover for gunrunning) to Nieuw Amsterdam—the island city fort that should have been New York—on faint hints that somebody there might comprehend his predicament and know how to send him back to his rightful world. Meanwhile, Hal stumbles into intrigues, romance, and an incipient insurgency. There are ingredients for a YA swashbuckler in this smart, energetic alternative-history opus from pseudonymous author Alexander (Lady of Ice and Fire, 1995). But between the sex, swearing, and gore, the lively antics remain consistently R-rated. Alexander succinctly sketches details of this brutal, archaic milieu, mainly in terms of military troop movements and command virtues (or lack thereof). Further subtleties of this class-bound alternate America tend to be marginalized or only inferred. Native Americans are remote “savages”; people of color only appear low in the ranks of the Dutch; Massachusetts Puritans have the continent’s only democratic government but are otherwise distant, religious-fanatic menaces. Still, the pace and action never let up. Adventurous readers should find themselves acclimating to this raw, rustic, rough-and-tumble environment just as the plucky teenage protagonist does.

A rousing what-if look at a decidedly different America persuasively stuck in a historical past.