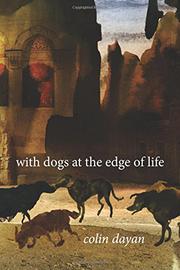 WITH DOGS AT THE EDGE OF LIFE

An exploration of the ways dogs help humans “reconsider the ethical life: the conscience it demands, the liabilities it incurs.”

For Dayan (Humanities, Law/Vanderbilt Univ.; The Law Is a White Dog: How Legal Rituals Make and Unmake Persons, 2011, etc.), dogs are more than simply man’s best friends. They represent a “bridge that joins persons to things, life to death, both in our nightmares and in our daily lives.” As such, canines make humans aware of “the austere experience of nonrelation” that results from attachment to morality, which itself depends on privilege for its power. Dogs force humans to embrace “the discomfort of utter relatedness,” which Dayan believes has to do with ethics or “how individuals relate to what is not familiar.” In the first section of this three-part book, the author explores her own relationships to dogs, which began with a pet she loved and lost as a small child. Later on, other dogs that came into her life rekindled her joy and opened a connection to the divine while revealing hard truths—such as the violence that lived within her husband—that made her realize her own status as a fellow animal. In the second third of the book, Dayan examines three court cases involving owners and dogs falsely assumed to be involved in illegal dog fighting. For the author, each story not only offers evidence of “canine profiling,” but also of just how fragile constitutional rights become when confronted by the “unholy alliance of intolerance and state power.” In the last section of the book, Dayan examines representations of canines in two independent films from Turkey and Mongolia. “Through the dogs’ eyes,” she writes, “we sense a world devoid of spirit, ravaged of communion.” Stimulating and lyrical, her book suggests a unique, trans-species approach to understanding ourselves as well as the limits of human cognition and the hubris that inheres in all the things we create.