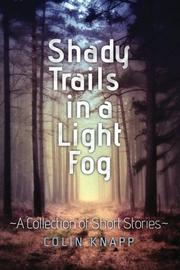 SHADY TRAILS IN A LIGHT FOG

A debut collection of 20 short stories in which many characters struggle to survive and some find hope and redemption.

As suggested by the evocative title, Knapp (Sweetwater Dreams, 2014, etc.) often explores the theme of disorientation, caused by a wide array of circumstances—injury, grief, exhaustion, alcohol, marijuana, extreme weather conditions, a power outage, and so on. He also examines the tough decisions that people make in such situations. For example, Tommy Martingale, the protagonist in “Master Procrastinator,” wakes up with a sore head and memory loss in a dark, guarded basement that also contains two corpses. Here, the author successfully employs a second-person narration that will draw readers in; they’ll gather information right alongside Tommy as he escapes and wanders through wintry Chicago streets with a sense of paranoia and foreboding. “Heart in a Cold Night” is a similarly well-plotted story in which a woman executes a plan to get rid of an abusive husband in the midst of a blizzard. Suspense builds as the snow accumulates, and seemingly innocuous details become pivotal as the elements of the plan reveal themselves. In “Ground Halcyon,” a weary artist/bartender thinks that he might have witnessed an armed assault in an alley across the street, which leads to arguably the best line in the book: “Alan watched the twitching foot shrink out of sight like a curling piece of bacon.” Perhaps the most affecting tale is “Margarita,” in which a recent widower, Del Klein, tries to break out of his shell—a process made more acute by Knapp’s use of a first-person narrative voice. In the story, the protagonist unexpectedly connects with his sister’s friend’s aunt—who, it turns out, is facing her own mortality—and departs the next morning “in a daze” with a hangover and a cat that’s cleverly named Agave.

A respectable first outing by Knapp, featuring tales that aren’t for the faint of heart.