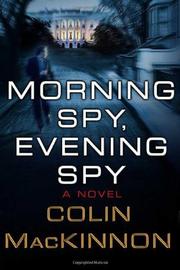 The facts surrounding 9/11 are blended with fictional Mideast intrigue in MacKinnon’s slow-paced but solid spy thriller.

When former CIA agent Ed Powers is gunned down one morning on a Peshawar street, the authorities have two questions: Who shot him? And what had he been doing to get himself killed in the first place? Powers had a sketchy past, to say the least, and as rumors of drug-smuggling and other untoward activities start to surface, the media and a few unfriendly Congressmen begin pressing the Agency for details. At the center of it all is CIA man Paul Patterson, once-divorced, world-weary and on the hunt for Powers’s killers. Topping his list of people to talk to is Kareem, a former Agency informant thought to have all manner of shady connections to the world of Islamic terrorism. Meanwhile, in what might well be a related development, Arab men have begun popping up at flight-training schools around the U.S. MacKinnon, formerly Iran Country Coordinator for Amnesty International, has a quiet, spare style and a knack for nailing down just the right details. It’s an approach that lends the story an air of authenticity. With the chase leading him around the globe, Powers is less Bond-style hero than flawed guy just trying to get things done. As the tale slowly approaches end, this sense of vulnerability only adds to the tension.

A nicely written thriller, and about as mercifully free of cliché as the genre will allow.