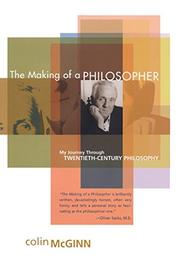 THE MAKING OF A PHILOSOPHER

Playful memoir offering an amusing view of academic philosophy’s day-to-day tussle, as well as a clear introduction to the author’s thought.

By his own description, McGinn (Philosophy/Rutgers) is short, in his 50s, likes to surf kayak, and is thought to look like Anthony Hopkins. This sort of self-revelation is usually anathema in the abstract realm of philosophy, but McGinn provides ample doses of it, side by side with introductory treatments of his own ideas and those of philosophers who have shaped his thinking, from St. Anselm and Descartes to Bertrand Russell, Saul Kripke, and Donald Davidson. The stated, largely fulfilled purpose of this intellectual autobiography is “to explain philosophy in an accessible, engaging way” by situating it “in its personal context.” The grandson of coalminers, McGinn grew up in working-class England, interested chiefly in rock drumming until a “switch” turned on in his teens and his attention shifted to philosophy. Believing he could never make a living at it, he majored in psychology in college, but found his way back to philosophy in graduate studies at Oxford. As a philosopher, McGinn is best known for his “mysterian” view that we lack the cognitive equipment to solve the mind-body problem; as a public intellectual, he’s familiar from appearances on television and essays in the New York Review of Books. His memoir omits love and sex, but almost everything else is up for grabs, including his one-time obsession with Ms. Pacman, his friendships (with, for example, Oliver Sacks), his frequent fallings-out (with such worthies as Daniel Dennett and Oxford University), his taste in clothes (Levi's), and a great story about Jennifer Aniston.

While not plumbing all the intricacies of the ideas he cites, McGinn succeeds in elucidating their basic outlines and in showing winningly what it’s like to be a philosopher “from the inside.”