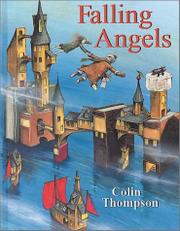 A gentle fantasy about seeing with your heart as well as your eyes. Sally could always fly, and although her mother doesn’t believe it, her grandmother knows it to be true. As her grandmother is confined to bed, Sally brings her orchids from Africa, a shell from Patagonia, even snow from “where no one had ever walked.” Finally her grandmother flies with her, to her favorite place, where she takes her last breath. Sally never stops flying even when she grows up, and she flies with her children and grandchildren, too. The metaphor of imagination is tethered to Thompson’s (Future Eden, not reviewed, etc.) intricately detailed, dreamy illustrations: here’s a house with an airplane in the yard; there’s one sandwiched next to a clearly inhabited domicile-sized shoe. There’s a page of wondrous doors, and several of small boxes that might hold a gargoyle or a pair of red shoes. Beds sprout wings and roots and lakes lap gently at the edge of the bureau. The story works on several levels, but it is the fascinating pictures that will have young readers and listeners asking to see it again and again. (Picture book. 5-9)