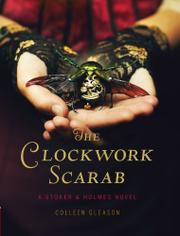 From the Stoker & Holmes series, volume 1

A vampire slayer and a great detective (-in-training) fight baddies in a steam-powered London.

Alvermina “Mina” Holmes is thrilled when she’s invited to a secret rendezvous at the British Museum; she’ll finally prove herself a fitting successor to her famous uncle Sherlock. The mystery she finds is every bit as fascinating as she could have hoped: bloody murders, a secret society, even a time traveler. Along with pesky vampire slayer Evaline Stoker, Mina investigates the mysterious Society of Sekhmet. Mina deduces, while Evaline (ever ladylike in her split skirts) does violence to their enemies. Between attacking villains and questioning her own prowess, elegant Evaline develops warm feelings for a common thief named Pix. Meanwhile, Mina is troubled by her attraction to the almost-as-clever-as-she-is Inspector Grayling. Some elements fall flat: The time traveler’s Nikes and “egg mick-muffins” clash with the tone, and Pix’s over-the-top guttersnipe dialect—“No’ all of ’em ’re true”—is pure distraction. Nonetheless, the budding friendship between the bickering girls brings heart into this gadget-laden mystery. While Pix and Inspector Grayling will clearly provide romantic interest in forthcoming volumes, it’s the snarky bromance between Stoker and Holmes that stands out.

The mishmash of popular tropes (steampunk! vampires! Sherlock Holmes!) will bring readers in, but it’s the friendship between the two girls that will keep them