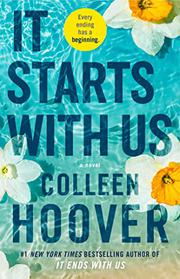 IT STARTS WITH US

The sequel to It Ends With Us (2016) shows the aftermath of domestic violence through the eyes of a single mother.

Lily Bloom is still running a flower shop; her abusive ex-husband, Ryle Kincaid, is still a surgeon. But now they’re co-parenting a daughter, Emerson, who's almost a year old. Lily won’t send Emerson to her father’s house overnight until she’s old enough to talk—“So she can tell me if something happens”—but she doesn’t want to fight for full custody lest it become an expensive legal drama or, worse, a physical fight. When Lily runs into Atlas Corrigan, a childhood friend who also came from an abusive family, she hopes their friendship can blossom into love. (For new readers, their history unfolds in heartfelt diary entries that Lily addresses to Finding Nemo star Ellen DeGeneres as she considers how Atlas was a calming presence during her turbulent childhood.) Atlas, who is single and running a restaurant, feels the same way. But even though she’s divorced, Lily isn’t exactly free. Behind Ryle’s veneer of civility are his jealousy and resentment. Lily has to plan her dates carefully to avoid a confrontation. Meanwhile, Atlas’ mother returns with shocking news. In between, Lily and Atlas steal away for romantic moments that are even sweeter for their authenticity as Lily struggles with child care, breastfeeding, and running a business while trying to find time for herself.

Through palpable tension balanced with glimmers of hope, Hoover beautifully captures the heartbreak and joy of starting over.