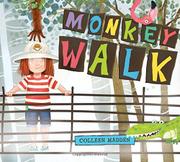 In this sparsely worded tale, an older sibling of messy twins turns out to be uniquely gifted at meeting the needs of a particularly prankish ape during a family trip to the zoo.

As their mother blithely attends to her phone rather than her offspring, it’s up to the protagonist to pick up the detritus of those pesky little sibs. Perhaps recognizing her eldest’s frustration, their mother encourages the beleaguered kid to climb up a rope trellis to something called the “Monkey Walk.” The protagonist complies only to find both hat and personal gaming device snatched by quick orange fingers, which is all readers see of the troublemaker till the end. Trades are suggested via signs held by various animals including (to the protagonist’s understandable, “Oh, you have got to be kidding” reaction) penguins for the device. The denouement reveals the thief to be a multitalented orangutan (not the titular “monkey,” but that’s neither here nor there). With a keen eye to the importance of detail, Madden immediately and easily sets the tone, the feel, and the characters. Refreshingly, the book avoids the proselytizing tone so many picture books succumb to when addressing the hand-held electronic world. Instead, this light and airy storytelling opts to show rather than tell. The protagonist’s family all present white, but other zoo visitors are diverse.

Bubbling over with a singular charm of its own, this book will have kids going ape over the monkeyshines here.