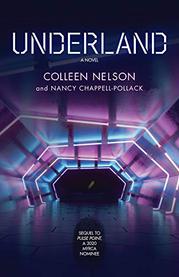 The fates of a community of people forced to labor underground and of the city that enslaved them are inexorably intertwined in this sequel to Pulse Point (2018).

Alternating narration from Sari, a City dweller introduced in the first installment who becomes suspicious of her corrupt leaders, and Ama, a 12-year-old who toils alongside a group of other Unders, reveals horrifying secrets. The Unders mine for salt brine used to produce energy for the City, and the tunnels they dig have at long last destabilized the domed City’s infrastructure, imperiling all. This rapidly paced story focuses on building the atmospherically bleak, ritualistic world of the Unders, where children are brought to work at young ages by Krux, a cruel overseer, and girls disappear to become mothers as soon they start menstruating. Building directly on the events of Pulse Point, this sequel often feels rushed and its conclusion perfunctory, with writing that veers toward platitudes rather than allowing for its characters’ stories to unfold naturally. While many of the ideas presented are worthwhile, especially the ways in which good leaders are not born but self-made, finding their ways through self-doubt and struggle, this tale doesn’t explore them fully. All of the characters assume a White default; Ama is in love with her friend Romi, who is also female.

Ties up a dystopian adventure but disappointingly lacks depth.