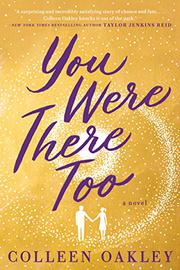 YOU WERE THERE TOO

A woman finally meets the man of her dreams, literally, then must decide what to do about it.

Mia and her doctor husband, Harrison, have recently moved from Philadelphia to a small Pennsylvania town. Mia spends most of her time trying to convince local art galleries to show her work and grieving the loss of three very wanted pregnancies. Although their marriage is largely happy, Mia is keeping a secret from her husband and everyone else—for years, she’s been having dreams about a man she’s never met. She assumes he’s just a figment of her imagination, but then she sees him at the grocery store—and runs into him again when Harrison treats his sister for appendicitis. His name is Oliver, and he’s been dreaming of her, too. Meanwhile, Mia and Harrison’s relationship hits a significant roadblock—he decides he doesn’t want to try again for a baby. As Mia reels from Harrison’s decision, she and Oliver begin to research their unlikely dream connection. They have so much in common, and being with him is easier than being around her withdrawn husband. It’s clear that the two of them are connected in some way—but what does that mean? Should Mia be with Oliver or Harrison? Oakley (Close Enough To Touch, 2017, etc.) skillfully navigates several twists and turns, never settling for a predictable plot. The tension ratchets up quickly in the last third of the book as the characters hurtle toward the somewhat shocking event that finally reveals why Mia and Oliver are meant to be in each other’s lives. Readers expecting a simple happily-ever-after should look elsewhere, but those looking for a Me Before You–style sobfest are in the right place.

A heartbreaking and thought-provoking exploration of fate, love, and choice sure to bring on a few tears.