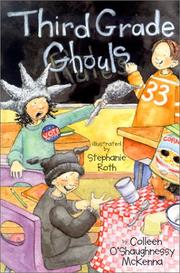 Remember when you tried to think of the perfect Halloween costume? This perennial question of the holiday is on everyone’s mind, but no one is more concerned with it than third-grader Gordie. He does not want to go as a ghost again. His friends try to help him. Lamont even volunteers his creative mother as a helper. After all, Lamont will wear a giant box and go as a breakfast table. His mom even saved a big box for Gordie—a box of toilet paper! The whole bus is laughing, and Gordie hastily brags to the bus bully that he will dress as something scary. To complicate his problem, he has volunteered to hold the hand of a first grader who is so afraid of costumes that he vomits when he sees a scary one. So, what to do? In the end, things work out for everyone and the annual Halloween parade goes off without a hitch. This is a universal, if predictable, story of the dramas that surround the choosing of Halloween costumes and the nervousness and social pressure surrounding elementary-school costume parades. Clear, large typeface, generous white space around text, and sweet occasional pencil sketches make this attractive to the early reader. Though the basic plot is uncomplicated, many extraneous classmates muddle the simplicity. For fans of Cam Jansen and the Boxcar Children. (Fiction. 7-10)