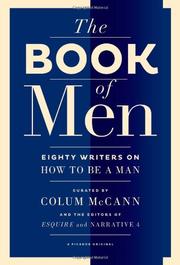 THE BOOK OF MEN

Eighty Writers on How to Be a Man

A collection of 80 pieces on the essence and challenges of manhood that almost reads like a literary parody of self-help books.

According to the introduction, the book commemorates the 80th anniversary of Esquire, a magazine that “has always sought to instruct.” Here, the instruction concerns “what it means to be a man and how to live up to that responsibility.” The project is a collaboration between the magazine and Narrative 4, which attempts to “connect people and communities everywhere through the sharing of stories," and the collection’s contents were curated by novelist McCann (TransAtlantic, 2013, etc.), a co-founder of Narrative 4 and Esquire contributor, along with editors from each. The pieces span much of the globe, crossing gender lines (some of the best are from women, some of whom don’t seem to treat manhood as seriously as many men do), featuring journalists, novelists and a few nonwriterly ringers (actor Gabriel Byrne, songwriter-producer Joe Henry). There is plenty of violence and copious amounts of tears, and there is sex that is usually more an expression of power, however twisted, than of romantic love. Some of the shortest are some of the best, such as this two-sentence contribution by Pakistani novelist Mohsin Hamid: “What did it even mean, walk like a man? Still, Omar was in enough pain to take off his makeup and start trying.” There’s a provocative piece of reportage on a transgendered performer by novelist Michael Cunningham, which ends with the question, “Men. I mean, what are we anyway?” There’s also an instructional piece by Vanessa Manko that initially seems to be about sex—“It is done with the body, not with the mind. She should feel when you begin to move and if she precipitates the wrong direction, you’ve done something wrong”—but is really about the tango (which is really about sex). None of the pieces are titled, and many blur the distinction between fiction and nonfiction.

A mixed bag. Each piece is intended to respond to “an essential question: What is a man?” but the answers remain elusive.