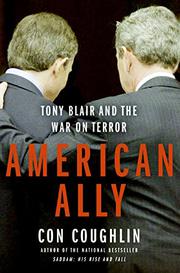 Tony Blair and the War on Terror
by Con Coughlin
BUY NOW FROM
AMAZON
BARNES & NOBLE
GET WEEKLY BOOK RECOMMENDATIONS:

Tony Blair’s no mere Festus to George Bush’s Marshall Dillon. No, writes London-based journalist and Iraq-watcher Coughlin, he stands tall all on his own.

As if in rebuttal to parliamentarians who accuse America of dictating Britain’s foreign policy, Coughlin argues that Blair has been an effective ally who has given as much guidance to the American leadership as he has received. Though initially identified as an epigone of Clinton, even “the younger brother Clinton has been yearning for,” Blair developed an even more meaningful rapport with Clinton’s successor; Coughlin quotes one White House aide as saying, “Blair was the world leader with the most influence on Bush…No one who sat there listening to them go back and forth could accuse Blair of being a poodle.” Not least because the poodle, after all, is a French dog, and Blair shared Bush’s disdain for French foot-dragging in meetings of the UN Security Council, which hampered the two leaders’ efforts to crush the regime of Saddam Hussein until they decided to go it alone, the United Nations be damned. Coughlin is quite certain that members of al Qaeda, and Osama bin Laden himself, were in contact with the Iraqi government in the days before 9/11, and he seems equally sure, with Blair and Bush, that going to war against Saddam was the right thing to do, absence of weapons of mass destruction notwithstanding. Yet he is no mere cheerleader, just as, by his account, Blair is no mere toady, and Coughlin writes penetratingly of the decline of Blair’s influence in Washington even as the neo-cons in the Cheney camp usurped Iraqi policy from the rational, coalition-building, nation-building exponents of the Powell doctrine.

Both Clinton and Cheney may be surprised to learn how much Blair privately disagreed with some of their actions, but Coughlin’s point remains: Blair and his nation are America’s strongest allies today. A worthy—and newsworthy—book.

A JOURNEY
by Tony Blair
Nonfiction

THE MUSLIMS ARE COMING!
by Arun Kundani
Newsletter sign-up