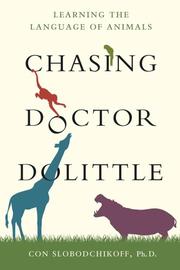 Learning the Language of Animals

The director of the Animal Language Institute gives an affirmative answer to the question: “Do animals have language?”

Slobodchikoff (Biology/North Arizona Univ.; Autobiography of a Poodle, 2012, etc.) has closely studied the behavior of rodentlike prairie dogs for years and is convinced that the chirps they emit when they perceive a dangerous situation deliberately communicate information that is ordinarily inaudible to human listeners. He and his students have digitally analyzed the prairie dogs’ 10-second alarm calls (which to us sound like cheeps) and correlated these to specific environmental stimuli. Slobodchikoff argues that the sounds contain “as much information to prairie dogs as a long, drawn-out sentence would for us.” Along with several other experiments showing that chickens, monkeys and other animals routinely identify predators by different calls, this provides the basis for the author’s contention that animal signaling is in fact a language. Slobodchikoff presents his view in opposition to behaviorists, whom he characterizes as believing that “animals aren't even conscious of their own existence, much less anyone else's.” He does not claim that animal communications are comparable to human discourse, but suggests that recognizing they, too, have a primitive kind of language constitutes an important step toward the recognition of our fundamental kinship. Slobodchikoff believes that animals communicate information intentionally, and this shapes their mental representation of the environment in which they live. Nor is their use of language restricted to the realm of sound, he writes. Dogs signal the boundaries of their territory by leaving odors, squid change color, etc. The author concludes that we need to extend our study of language in other species to the entire “Discourse System” necessary to produce it, including specialized areas of the brain devoted to understanding and producing language.

Intriguing but not entirely convincing.