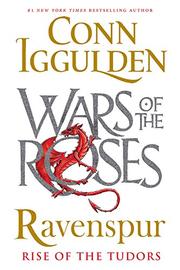 Rise of the Tudors

From the Wars of the Roses series, volume 4

Iggulden (Bloodline, 2016, etc.) concludes his Wars of the Roses series with Richard III dead on Bosworth Field and Henry VII taking the throne for the House of Tudor.

After the bloody battle of Towton, Edward of York seizes the crown from Henry VI, House of Lancaster, a frail and incompetent ruler. However, Edward IV prefers ale and the hunt to kingly duties, and soon Richard Neville, Earl of Warwick restores Henry VI to the throne. Edward and his ever loyal brother, Richard of Gloucester, take refuge in Burgundy. That’s close by the Paris sanctuary of Henry’s queen, Margaret of Anjou, and their son, Edward. Edward and Richard mount a campaign to retake England, one leaving Warwick dead after a battle near Barnet. Edward, crown restored, again turns dissolute. Richard schemes. Princes are murdered. Edward dies. Richard takes the throne. Margaret and son Edward return, landing in Wales, but then young Edward dies in battle, and from the wilds of Wales springs young Henry Tudor (Tewdyr from Welsh), “no doubt or indecision in him,” descendant of John of Gaunt, House of Lancaster. Mentored by his uncle Jasper Tudor, Henry Tudor lures Richard III into battle and defeats him at Bosworth Field. Iggulden’s a masterful writer, capable of setting a scene, sketching a description, or defining a character in a few words, often while turning a literary phrase—a dead York brother “raised to an angelic presence by the smoothing iron of memory.” The dialogue sounds modern, but it's laced with historical syntax and grammar to lend credibility. Moreover, despite the complicated history and plethora of Edwards, Henrys, and Richards, Iggulden’s narrative remains clear as the aristocratic houses fight not only for political power, but also titles and crown estates, land and wealth.