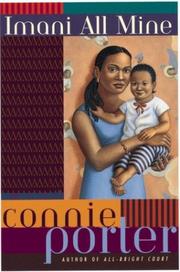 African-American Porter (All-Bright Court, 1991) has again created a protagonist with her own voice and an affirming take on life in Buffalo’s inner city—where guns kill the innocent and where teenagers too often end up having babies. High-schooler Tasha, the 15-year-old narrator, tells her story with an authenticity that adds even more grit and realism to a tale that’s often a headline. She lives with her baby daughter Imani (meaning faith —in some African language—) and her mother Earlene. Imani looks just like Tasha, which makes Tasha, who doesn’t have much else of her own, rather happy. Her story builds quietly, almost off-handedly, to its tragic end as the girl describes her exhausting daily routine in the most matter-of-fact terms: not only must she care for Imani, but she also has to bring the baby along to school. While Imani is taken care of in the school’s daycare center, Tasha conscientiously attends classes. Her own mother, never married, was too busy with her boyfriends to comfort Tasha on the night she was raped at knife-point in a nearby park, and she was even too busy to notice (until labor began) that her daughter was pregnant. The rapist and father of Imani is a fellow student, a boy who, Tasha thought, —really liked— her (—As fat as I am. As black as I am—), which is why she left the Skate-A-Rama with him that evening. Now, thankfully, he doesn—t even seem to recognize her. Meanwhile, as she tries to build a life for herself and her newborn, Tasha records all of Imani’s milestones; nervously observes her neighbor’s drug-dealing; grudgingly grows fond of her mother’s white boyfriend Mitch; and stoically tries to keep up with her schoolwork. At end, random gunfire will break apart—for a time, it seems, almost completely—Tasha’s already fragile world. An unsparing, remarkably unsentimental tale of a typically unsung heroine. (Author tour)