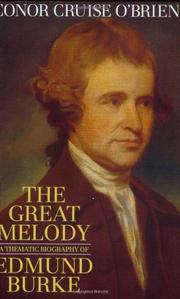 THE GREAT MELODY: A Thematic Biography of Edmund Burke

O'Brien (Pro-Chancellor/Univ. of Dublin; Cunning and Passion, 1988, etc.) argues here that Edmund Burke (1729-97), widely considered the ""father of modern conservatism,"" was really a ""liberal pluralist."" Neither biography (not even an ""unconventional"" one, as O'Brien claims) nor anthology (too little Burke, too much O'Brien), this is an extended political essay focusing on four arenas of 18th-century political life--Ireland, America, India, and France--preceded by an attack on the dominant school of Burke scholarship, which, in assessing Burke as a conservative, consigned him, O'Brien says, to ""the ash-bin of history."" O'Brien believes that he can provide the ""basis and essentials for a Burke revival"" by proving that Burke was, in fact, a prophet of revolution. The ""great melody,"" a phrase derived from Yeats, describes Burke's legendary eloquence but also his primary theme--defending individual liberties against political tyranny wherever it appears--a theme that was, O'Brien claims, the source of those inconsistencies for which Burke is often criticized, such as his support of the American Revolution and his opposition to the French. According to O'Brien, ""fantasia,"" a word derived through Isaiah Berlin (with whom O'Brien has a long exchange in the epilogue) from Vico--a phrase meaning ""historical imagination""--was Burke's distinguishing gift. Though strong on political narrative, O'Brien dismisses as irrelevant Burke's literary journalism, including his essay ""On the Sublime and the Beautiful,"" which elaborated an aesthetic that informed Burke's entire life. The author also dismisses the importance to Burke's thought of his large, raucous, and disorderly family, to whom he was devoted and among whom his grand, elitist, and orderly political ideals evolved. Strong on O'Brien but weak on Burke--and moat readers will have to resort to a handbook on the religious and political controversies of the 18th century, as well to as a conventional Burke biography, to make sense of it all.