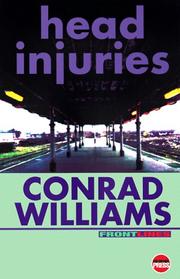 A debut novel that progresses like crisscross dreams in a damaged head, by a young Englishman whose work has appeared largely in horror and fantasy anthologies. Narrator David Munro, a second-rate painter, has not seen his college roomie Seamus “Shay” Cope since he threw a teacup at him three years ago. But now their shared companion, Helen Soper, has called David to the English seaside town of Morecambe to help revive the unlovable Seamus, who’s now suffering some mystery malaise that affects Helen as well’something shapeless and ugly that is unfolding and that David has begun to feel as well. It’s winter and something cryptic is exploding within them. Odd figures spur childhood memories; as in a dream, a strange woman in a car slowly parts the skin of David’s cheek with her fingernail. Memories filter back: Had Seamus and their schoolmate Dando tried to drown a dog, then tie up David, nearly drown him in mud, and start to bugger him? Seamus tells David about a caving tragedy in New Mexico when his fellow caver got stuck and died of cold—which reminds David of Seamus nearly drowning him in mud. Bad karma comes twisting around David in the form of a murdered girl. Did MacCreadle, a horrible figure from their childhood, do it? Helen explains to David that they—re being stalked. But by whom? The three friends slowly form their own vocabulary to describe the events befalling them. And so they stumble vaguely on, David and Seamus with dreams of suffocation. It’s as if, Seamus says, —we’ve opened up our heads and nailed them together so that we’re all sharing the same Widescreen movie.— By novel’s end, their worst secrets have fountained upward in a collective dawning and bloodletting. The spine of this waking nightmare is a sad, gasping loneliness, into which any bad thought can fall and spear you. The family love that at last fills this vacancy is quite moving.